One of the greatest player ever to have played field hockey, Dhyan‘Chand’ Singh was born on 29 August, 1905. This is short summary of his life and achievements. 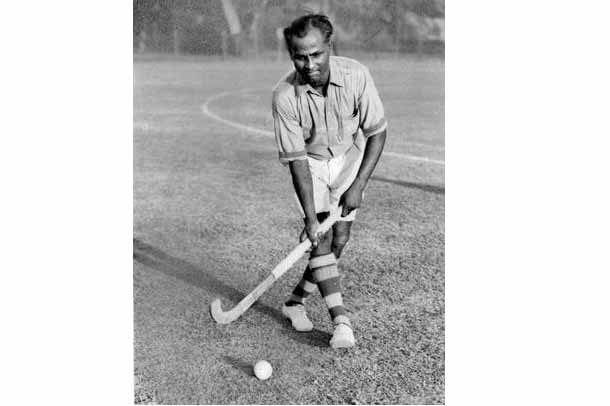 One of the greatest Hockey player ever, field hockey, legend Dhyan‘Chand’ Singh was born on 29 August, 1905.

His father was in the British Indian Army and had to shift often because of transfers. His schooling being affected, Dhyan Singh joined the Army at the age of 16 in 1921. Dhyan now started taking interest in hockey.

To hone his skills he used to practice dribbling in the dark after his duty hours, once the moon came out. His fellow players noticed this and started calling him ‘Chand’, which means moon in Hind.

Till 1926 Dhyan Singh, now Dhyan Chand participated mostly in army tournaments. He was selected to tour New Zealand with the Army team where they did exceedingly well, losing only one of the 21 matches played. Chand’s outstanding performance was noticed, and he was immediately promoted by the Army.

Following another sterling performance in the Provincial games, Chand was, picked up to represent India at the Amsterdam Olympics in 1928. In Amsterdam, the Indian teamed was pooled in one group with Denmark, Belgium, Austria and Switzerland.

India defeated Austria, Belgium, Denmark and Switzerland, 6-0, 9-0, 3-0 and 6-0 respectively. Chand had contributed 12 of the 24 goals. In the finals India played with the hosts the Netherlands. Three of India’s players were on the sick list. The skeletal team won 3-0 easily with Dhyan Chand netting to two of them.

With 14 goals from 5 matches Chand was the top scorer of the tournament. About the Gold medalists, one newspaper reported, “This is not a game of hockey, but magic. Dhyan Chand is in fact the magician of hockey.”

Posted in present day Pakistan, Chand’s platoon refused to grant him leave to participate in local tournaments. Despite that he was selected in the team to represent India in the upcoming 1932 Los Angeles Olympics.

They defeated Japan 11-0 in the first qualifier. In the second match, the hosts USA did not know what hit them.

They were ransacked 24-1, a world record till 2003, and Chand scored eight goals. India had another Olympic Gold to its credit. Following the games India took a long tour visiting several countries along the route and performing creditably.

For the 1936 Berlin Olympics Chand won the captaincy of the National side. After several international friendlies in the run up the Games, they arrived in Berlin on 13 July,1936.

India on the way to the semi-finals defeated Hungary 4-0, USA 7-0 and Japan 9.0. DhyanChand had scored eight of the goals. The team met France in the semi-final match and prevailed 10-0 over them with Chand scoring four. From the other group Germany had made it to the finals by defeating Denmark, Afghanistan and Netherlands.

India had lost 4-1 to Germany in a practice match before and the team wasa bit nervous. In the first half Germany defended well and India could only manage one goal. In the second half India went all out and beat Germany 8-1. Chand with 3 goals in the final totalled 15 goals in 5 matches.

Towards the end of the match

Chand continued playing in domestic tournaments and against international teams. In 1948 Chand retired from playing serious hockey He was honored by the nation at the inaugural Dhyan Chand Tournament in 1951. Aged 51, Chand retired from the Army and took up coaching at the National Institute of Sports, Patiala.

On December, 03, 1979, Dhyan Chand Singh, one of India’s greatest sons, departed for his heavenly abode.